There are lots of acronyms out there to describe filter ratings, and they can all be a little confusing. MERV…MPR…FPR. What do they all mean, and how do they differ from each other? Basically, they are all ratings systems for the filters you use in your furnaces every day.

One refers to the domestic and international Industry Standard rating system established by the American Society of Heating, Refrigerating, and Air Conditioning Engineers, while the others were created by 3M and The Home Depot. Let’s go over each of them.

MERV Rating (Minimum Efficiency Reporting Value): This is the preferred, primary rating system used in the furnace filter industry established by the American Society of Heating, Refrigerating, and Air Conditioning Engineers. Essentially, MERV reflects a particular filter’s ability to capture and hold particles and pollutants such as pollen, dust mites, mold spores, tobacco smoke, smog, dust and pet dander. They range from 1 to 16, with the lower and middle ranges designed for common residential and commercial use, and the high ranges designed for clean room and hospital use. When it comes to the average home, anything rated MERV 7 to 12 is sufficient to filter airborne contaminants.

MPR (Micro-Particle Performance Rating): This rating system was developed by the company 3M, designed to rate the manufacturer’s filters and their ability to capture airborne particles smaller than 1 micron. This system helps customers compare Filtrete filters based on the level of air filtration desired. The higher the MPR, the better the filter’s ability to capture particles from the air, only taking into account microscopic particles between 0.3 and 1 microns.

FPR (Filter Performance Rating): This rating system was created by The Home Depot pertaining to brands sold in their stores, including Honeywell. A color code and number scale (4 to 10) closely resembling the MERV rating characterizes the FPR. The Home Depot stopped using MERV ratings a few years ago and now exclusively relies on its own system, which accounts for the ability to capture large and small particles, as well as measure weight gain over the filter’s lifetime. 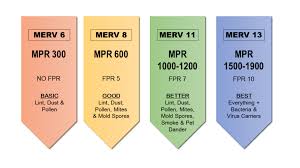 While all of the above systems have different numbers to represent the ability of capturing particles, they are all essentially saying the same thing. That being said, MERV is the only nationally regulated, independent rating system for air filters. Why are there three separate ratings systems for essentially the same filters? Most likely just a marketing ploy by these companies to promote their own brands, but that’s just a best guess. The fact remains that we rely on MERV ratings here at Filtration Montreal.

We know they can be confusing, so why not give us a call or shoot us an email with your question? We will help you choose the right filter for your furnace. Speaking of furnace filters, stock up today – winter’s coming!